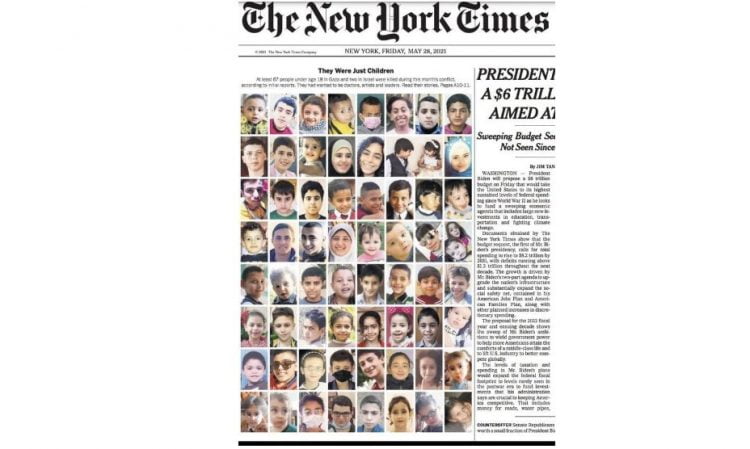 On Friday, May 28, 2021, the New York Times surprising many people by publishing a front page of the children killed in Gaza.

According to the New York Times article, at least 67 children have lost their lives because of Israel’s bombardment. It also revealed the identities of all 67 minors, the circumstances of their deaths, and their parent’s sadness and disbelief stressed the dangers of war that continue to threaten the lives of Palestinian children.

In the same article, the New York Times also estimated that a typical 15-year-old in Gaza would have witnessed four major Israeli offensives.

Many people are surprised by this article cause the same newspaper ran pro-Israel advertising on May 22. They are also attacking Dua Lipa, Gigi, and Bella Hadid, celebrities who marched against the genocide in Palestine.

He wrote on his Twitter saying, “The NYT’s has participated in shaping and spreading anti-Palestinian racism and Israeli propaganda for decades. This will not be reversed by an obituary that depoliticizes genocide. And btw, when we mourn, we mourn all of our martyrs, not just our children,”

The New York Times’ article release just one day after Haaretz, an Israeli Hebrew-language newspaper, publish images of the 67 children killed in Gaza. ‘This is the price of war,’ read the front-page headline, and on the third page, they wrote, “The names and tales of the young victims of the battle,’ and ‘When leaders unleash a war, the weakest pay the price.’

A lot of people commended the Israeli newspaper’s objectivity. They emphasized that the real victims of the endless ‘conflict’ between Israel and Hamas are those children.

But it seems like netizens were more concerned with the New York Times’ stance sudden change.